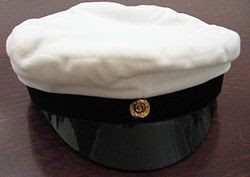 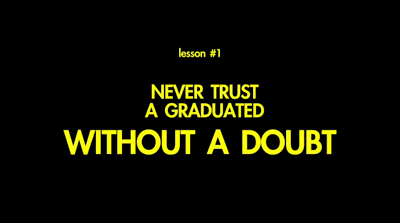 
Finnish Vendetta: Life after the graduation

May 1st.
It is on that day that many Finns come out wearing their graduation caps. Unlike American design, the Finnish graduation hats somewhat look like what sailors might wear, with white tops, a thick black band and a small visor. Its appearance is also very similar to the Swedish version, but instead of colored fabric cockade, it has a metallic, gold-colored cockade depicting the lyre of Apollo, the insignia of the University of Helsinki. See how strong the symbol is: Finland was part of Sweden kingdom over 5 centuries and Helsinki is the capital city of a rural country. So Ylioppilaat (Finnish word for graduates) have the appearance of pure and innocent sailors. But they also embody the decadence and corruption of cities in a country where Rural vs Urban deviation is a big historical deal – may be more and more taboo since its technological and educational raise. May 1st is also a time when the country is finally getting out of the long winter. Snow has melt almost entirely. Days are about to be only days.

Vendetta.
“Life after the graduation”, a collaboration series of 3 short movies by Olli Horttana and Pekka Ruuska, is finger pointing the supposed purity of graduates, considering their supposed access to knowledge and civilization. “Life after the graduation”, as in any good epic tale, is playing with the basic concepts of Good and Evil. According to the medias, the good ones would be the Ylioppilaat. The Evil would be the countryside men and their environment. The good ones are those who own the knowledge and therefore, wisdom, power, “culture”; the evil is foolish and underdeveloped. By exacerbating those clichés, Horttana and Ruuska are deconstructing them. The series actually brings up to mind Quentin Tarantino’s filmmaking style, as there is this sense of humor that gets the audience laugh at things that aren’t funny. A mixture of comedy and drama is its recipe. The two graduates’ vengeance greed might actually be Olli Horttana and Pekka Ruuska’s real need of vengeance’s translation.  They indeed have both graduated from rural area high school, the same one actually, being possibly the first generation Ylioppilaat in their families. This video series might also be the expression of their disillusion towards a system that lied to them. Moreover, I see it as a tribute to Finnish rural Culture. And yes, knowledge can be sadism.

Tales.
Those two Ylioppilaat are like sailors chasing for whales. They are without mercy, cold and able to kill any countryman that crosses their path. “Life after the graduation” could be a Finnish contemporary Moby Dick. In Moby Dick, Ismaël, the narrator, is the one who cuts himself from the world. Achab, who aims at killing Moby Dick the solitary whale, is seeking for vengeance. He is a man who’s never been standing on earth, on any land, nothing but the ocean. Just like many Finnish people can feel like they live on a boat that never reaches any other land than their own. Moby Dick takes its inspiration from the Bible. Horttana and Ruuska’s triptych might take its inspiration from the Kalevala (folklore and mythological saga regarded as the national epic of Finland), at least unconsciously. I doubt about it. It would rather claim: “Let’s get rid of the Kalevala, let’s build up a new tale”. So indeed, it is time to start focusing on new tales! The construction of Culture, if that concept shall exists, is based on tradition AND its recycling. Not talking about knowledge here. I guess we talk about Art and what goes with it: its precious undefined aura.

So here we have a video series rich of stories, commitments, and voices. Finnish topics are renewed, and we might claim that it goes beyond the Finnish borders, in terms of urban vs rural issues at least. It is also very healthy to discover that the Finnish like expected melancholia mood is getting broken. Though we’re still deep in it, and for its best purposes, the nice surprise is that violence is treated through the spectrum of humor, without judgment, without pathos. And that is what allows the audience to be in a both reflexive and entertaining posture. Without tears.